This is one of three Guangdong area oolongs reviewed at the same time, with more distinction of type to be found in the Moychay site sales page description:

…The bouquet is brewed and blended with nutty, woody, biscuit, coffee, tobacco and fruity notes. The fragrance is deep and complex, fruity, with a woody accent. The taste includes a bit of a bitterness, a fruity sourness and a refreshing finish.

Brew tea with hot water (80-95 ° C) in a porcelain gaiwan or in a teapot of porous clay. The proportion is 3-4 g per 100 ml. The time of the first steeping is about 5 seconds. For each second step, increasing steeping time for each subsequent step, if necessary. You can repeat this method up to 10 times. 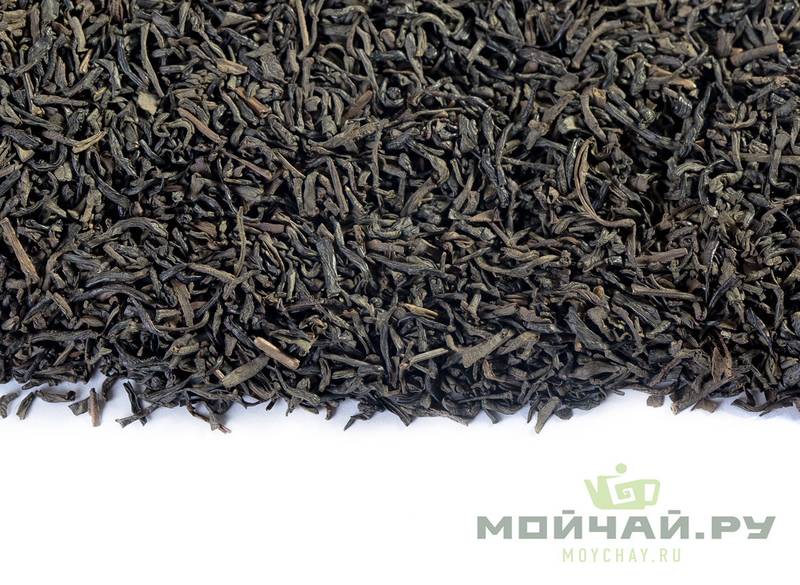 The brewing recommendation is important since this and the Huang Jin Gui version are especially intense, probably mostly related to a chopped leaf preparation style, and perhaps also to picking up some intensity and character change through a roasting step. Moderate proportion and relatively fast infusion time would work best, as described in the review trial results (based on using a slightly higher proportion).

Ba Xian (八仙) is a Dan Cong Oolong from Feng Huang in Guandong province, China. The name means literally "Eight Immortals" and refers to saints in Chinese mythology . Like other Dan Cong Oolong also this kind got twisted shaped leaves. This tea is usually heavy fermented and has a floral and sweet taste.

Interesting then, that the Huang Jin Gui version and this one are two completely different plant types typically from two different regions and prepared in two different ways, both seemingly prepared in a similar style (to each other) in these two versions.

The taste is interesting, rich and complex, and it’s also interesting noting the similarities and differences with the Huang Jin Gui Guangdong oolong version. That tea tasted a lot like coffee, and this sort of does, but less so. The profile seems more familiar related to Wuyi Yancha oolongs but not exactly like any of those. An aromatic aspect reminds me of a liqueur or perfume like quality that versions of those can exhibit, but the flavor set is different.

On to that: it has a hint of dryness, pronounced earthiness, a bit of char, and some slate-mineral range as well; those are the parts common to the other related oolong (just in a different balance). From there the flavor extends to more like an aromatic wood-themed spice, like frankincense or myrhh (tree sap and bark related spices, if I’ve got that part right). The perfume-like character stands out, a bit towards a cognac liqueur. Other earthy range seems closest to tobacco. Tobacco can span a broad range of flavor, depending on how it’s cured and prepared, and this is a warm, rich, heavy spice-oriented expression of it. It would make sense for some to note parallel with cedar or other aromatic woods beyond that, but that gets to be a matter of judgement. It could be interpreted as some sort of spice range instead, or given the broad range of floral aspects a lot of tea character could be interpreted in that range instead.

As is typical of a lot of tea types it’s the balance that makes it work (or not work), how the levels of different inputs and feel come together, along with sweetness. Shifted just a little this could be equivalent to some of the more refined, higher quality, distinctive Wuyi Yancha character; shifted a little in another direction and it would be unpleasant to drink. It’s balancing some heavy-flavor range aspects reasonably well. It doesn’t remind me of Dan Cong given the flavor and other aspect range, but then the character is unique, not exactly similar to any standard types. 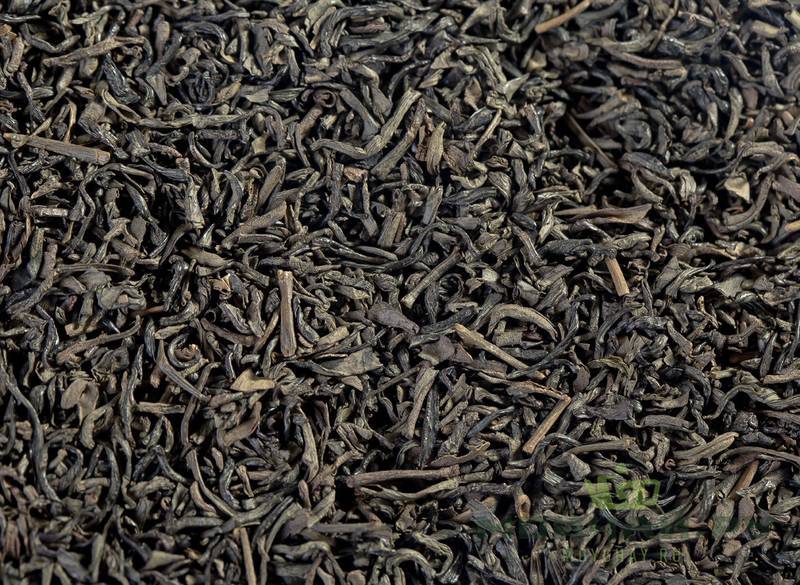 It would be completely essential to brew this at a light intensity; it just wouldn’t work brewed at a higher infusion strength. It’s not just that it seems to be a tea type that’s touchy about ideal infusion strength level, although that’s part of it; the fine chopped leaves seem to brew very quickly, so actual infusion intensity level would change a lot over the course of a second 5 seconds. It might work better to use a lower proportion than I have, to go with half the typical amount of dry tea per water I would with black teas and sheng or shu pu’er, to help strike that moderate balance.

The inky effect isn’t diminishing in this tea version, an unusual expression of mineral and earth tone, mostly towards a unique mineral range. It has sweetness and other flavor range beyond that, it’s just that the char and mineral stand out a lot. This must have been a completely different tea before that roasting. It was floral in nature, and still is, but that part doesn’t stand out as much for the other flavor range being so much heavier and more prominent.

It’s common for me to drink cool but not too-cold water between teas when comparing different types to clear my palate, and I’ve tried that in the middle of tasting this version. The idea is to see if I can’t reset to pick up more beyond the ink and char mineral range, to spell out more about the floral and likely mild spice tone, or to check back in on how accurate I think the tobacco interpretation had been. In drinking tea for enjoyment it seems as well to not try to list out the flavors and aspects as much and just go with the experience, letting the aspect effect build and transition however it does naturally.

Tobacco still works as a description. In a sense it’s like tasting something too earthy to be typical food, like tasting tobacco not necessarily intended for that form of consumption, like a cigar. I had smoked cigarettes when I was younger; this might seem closer to a Camel version to me, to the extent that I can remember that and translate it to a beverage flavor.

Sweetness paired with the rest of the range enables the other aspects to be more pleasant, along with none of those aspects being “off” in any conventional way, just atypical. It must be that the chopped-leaf presentation is affecting the proportion of compounds released quite a bit. In black teas and sheng pu’er that relates to astringency coming out, and to a limited extent this does translate into a different feel, so it’s also that, just in a much different and milder form. The flavor range is perhaps even more intense than most black teas manage, related to how quickly flavor extracts and intensity of experience of lightly brewed infusions. Aftertaste extends well past drinking it but there’s not much to add about that; it matches the flavor range.

Brewed quite lightly the next round is probably slightly better, but not transitioned that much beyond the aspects balance shifting some. Sweetness comes out more. Overbrewing this type of tea would make the earthiness and char effect stand out, and a dark toffee sweetness emerges with it brewed lightly. Probably the tea will transition to be milder and emphasize the char effect less over rounds too, shifting the overall flavor balance in a positive way. The feel picks up a little creaminess that hadn’t been as notable before. Tobacco is still unusual as a main flavor aspect, along with a heavy version of cinnamon, but it’s more integrated with other range, more balanced.

As I’ve mentioning in that other Guangdong oolong review it might be that another year of aging might soften the char effect and heavier mineral and earth flavor range, giving these teas greater smoothness and depth. Some of that balance can be achieved just by using very light infusions, and just the transition to different character over later rounds, that change in relative proportion of aspects. This is not a tea to drink in a hurry; it would be much better with focus to get the brewing proportion just right. I wouldn’t expect it to work well at all brewed Western style, but then to me that wastes potential of lots of types of oolongs. 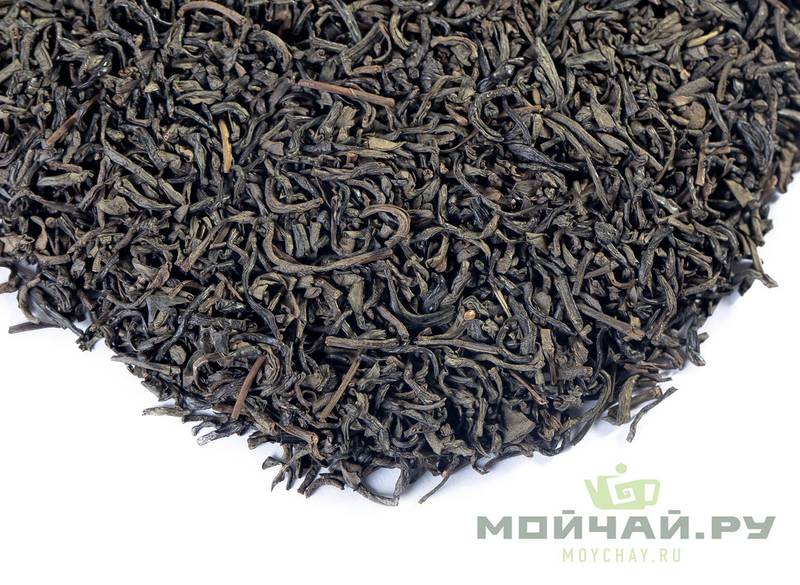 Oddly the character didn’t really seem to soften that much in later infusion rounds; the astringency (just an unfamiliar form of it) and coffee and mineral related flavor stayed very strong. Adjusting brewing temperature might offset some of that; it costs a tea in terms of extracting as complete a set of compounds (or at least that’s one typical view related to oolongs, with preferences varying about ideal brewing temperature range, tied to preference and other parameter factors), but if a certain range of aspects are a concern they might be moderated and shifted in proportion by such a change.

The tea character is pleasant and unusual. I tried it a second time at a lower proportion, again brewed quickly, and the flavor and feel were softer and more complex, shifted a little towards floral tone. Earthy tobacco and cinnamon tone still stood out but the tea is best carefully brewed to balance intensity. Experimenting with water temperature might also enable adjustment. I tend to brew oolongs just a bit off boiling point, at 95 C or so, limiting infusion time to shift intensity versus changing character balance through that factor, but going slightly lower to 85 or 90 might work better for this tea.