Since this is an interesting style of tea it will work to start with a product description first, from the sales page description:

…The bouquet of the brewed tea is warm and multifaceted, with nutty, woody, biscuit, balsamic, tobacco, and fruity notes. The fragrance is deep and warm, complex, spicy, with a biscuit accent. The taste is full-bodied and silky, changes from soft and sweetish, to juicy, slightly astringent, with a fruity sournes

Huangjin Gui (simplified Chinese: 黄金桂; traditional Chinese: 黃金桂; pinyin: huángjīn guì; pronounced [xwǎŋtɕín kwêi]) is a premium variety of Chinese oolong tea traditionally from Anxi in Fujian province. Named after the yellow golden color of its budding leaves and its unique flowery aroma, it is said to be reminiscent of Osmanthus.

This oolong is similar to Tieguanyin, with only a little oxidation. Consequently, it has a very flowery, delicate aroma without the astringency of a green tea or the heaviness of a Red/Black Tea… 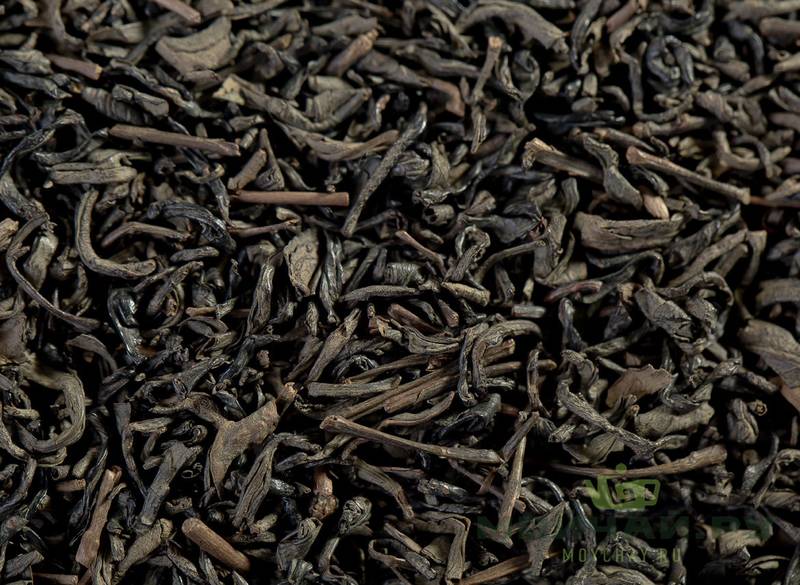 That last part gets into a particular preparation style, which wouldn’t necessarily match all the teas made from the plant type, and may or may not be a most conventional style (it is Wikipedia). Actually Tie Guan Yin made in a traditional style is somewhat oxidized, only to a moderate degree but more than in the current common “bright green” form. An alterative modern form is hardly oxidized at all but very heavily roasted, making for an unusual tea character, a floral nature a bit covered up by a char effect.

Since I didn’t read the Moychay product description prior to preparing the tea I had also missed this brewing instruction:

Brew tea with hot water (80-95°С) in a porcelain gaiwan or in a teapot of porous clay. The proportion is 3-4 g per 100 ml. The time of the first steeping is about 5 seconds. After that do short steeps (just for 1 second), increasing steeping time for each subsequent step, if necessary. You can repeat this method up to 9 times.

One second steep time is a stretch given the time required to pour water in and out of any kind of device but they weren’t kidding; much faster is better. And moderating the proportion quite a bit, as that suggested, would’ve worked better.

The initial taste is a bit strong; this brewed for too long. Often it works to go with a slightly slower initial infusion because teas need time to get wet but this is a very finely chopped leaf version and 15 seconds was too much, probably too long by at least 10 seconds. It will work to describe general character and examine the tea from a different perspective (being brewed too strong), but the next flash-steep infusion will determine how the tea brews at a typical intensity, and how it matches my own preference.

It tastes more like coffee than tea ever tends to. That can come up in versions like shu pu’er but not typically in an oolong, except maybe a very well-roasted Tie Guan Yin. Even for that case I think it’s the roast that’s matching, not the other flavor character. This has earthy depth that really is similar to coffee in flavor range. And plenty of sweetness, so it might well work out lighter. The other earthy range is a bit towards spice or tobacco; quite unique.

Brewed very light on the next round it works. It’s not light, actually, just only infused for a matter of seconds; probably it took 5 seconds to get all the water in and then completely back out, and brewed for 3 or 4 instead still might be optimum, really rushing that. These finely chopped leaves are brewing really fast, and probably releasing a completely different proportion of compounds into the brewed tea for exposing so much cut leaf edge to water, as is much more familiar with black teas and pu’er. 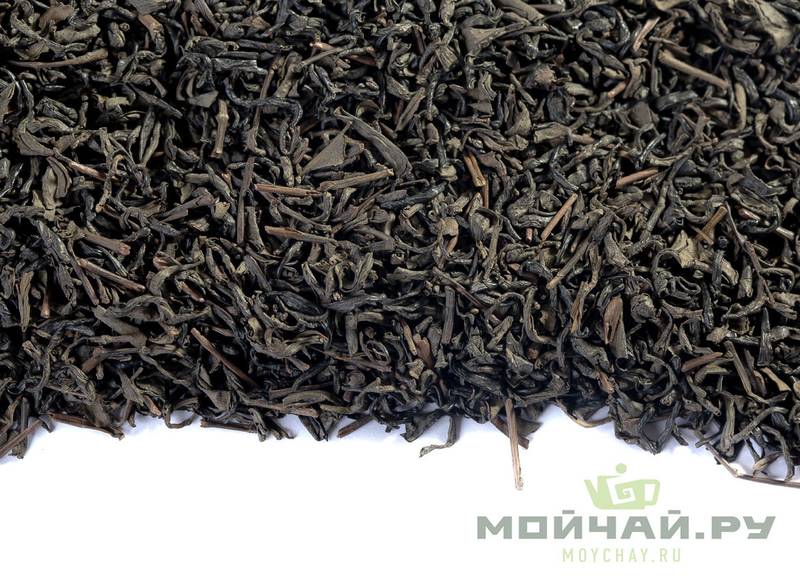 It still tastes like coffee, more so than any tea I’ve probably ever tried. That’s not so bad, even though I’m not so into coffee these days. A moderate amount of astringency relates to a heavily roasted flavor (it seems to tie together) and a slate-mineral range, and comes across as a sort of dryness. It’s not refined, although I wouldn’t call it rough, musty, or unrefined either, more just unusual for tea feel, and flavor, for that matter. “Below” the coffee-flavor aspect, roast effect, and slate-mineral a port-like flavor comes across, like red wine but heavier. A spice aspect is similar to the Rou Gui related version of cinnamon, Vietnamese cinnamon (or cassia), per what I’ve been told.

Coffee flavor is dropping back a bit on the next round (third infusion), giving way to other complexity, but this still tastes more like a medium-high French Roast than any tea I’ve ever tried. The other main part of the flavor still resembles that earthier form of cinnamon. Not surprisingly those heavy, earthy-range flavors carry over as a pronounced aftertaste experience. It might come across less as dryness than it had, but shifts in brewed-strength intensity would change that.

The flavor balance is still improving, softening and transitioning into more complexity. Some of that could relate to minor differences in infusion strength; going a couple extra seconds on timing would make a difference for this tea. Earthy mineral still stands out but spice range is more dominant than coffee at this point, or at least it has drawn even. The level of sweetness and feel seem more moderate and balanced too; this is either brewed lighter or the overall balance of aspects has shifted to be more pleasant. It was fine before, just unusual, but better this round. It picks up more of a caramel or toffee sweetness common to Fujian / Wuyishan roasted Shui Xian in this round (common to various roasted oolongs, but notable in a lot of better versions of those). Floral tone is present but it’s not a pronounced flavor aspect compared to the rest, to earthy and mineral range.

I mentioned in another Guangdong oolong version review (the Shui Xian version) that aging might improve these teas, especially this one and the Ba Xian. I don’t mean waiting seven years to drink them, instead setting them aside for a year or two to soften. That’s only a guess though. It’s a conventional approach for softening tea character when the roast level is heavy, per some input said to bring about more positive final results than just roasting the tea less and drinking it when new, depending on the initial tea character prior to roasting. Aging may not have a similar positive effect on what seems to be character derived from chopped-leaf processing and a roasting effect, so it just depends on how those inputs contributed to the outcome. The tea description didn’t include production time-frame but it seems likely this is a 2018 tea version, and that the roasting effect may have already diminished some and may yet soften a bit further over the next year or so, which may improve it (per my preference).

I tried a few more infusions later and the mineral kept picking up. That slate-tone mineral reminded me of the most typical flavor aspect in Liu Bao, a main type of hei cha, a post-fermented tea type. People would tend to either like Liu Bao or not depending on how that aspect worked out for them, although well-aged versions can soften in character, subduing the impression from that aspect even though it doesn’t really drop out even after extended aging. I wouldn’t say this tea necessarily tastes like Liu Bao but it did share a mineral-range aspect, especially pronounced in the later infusions. 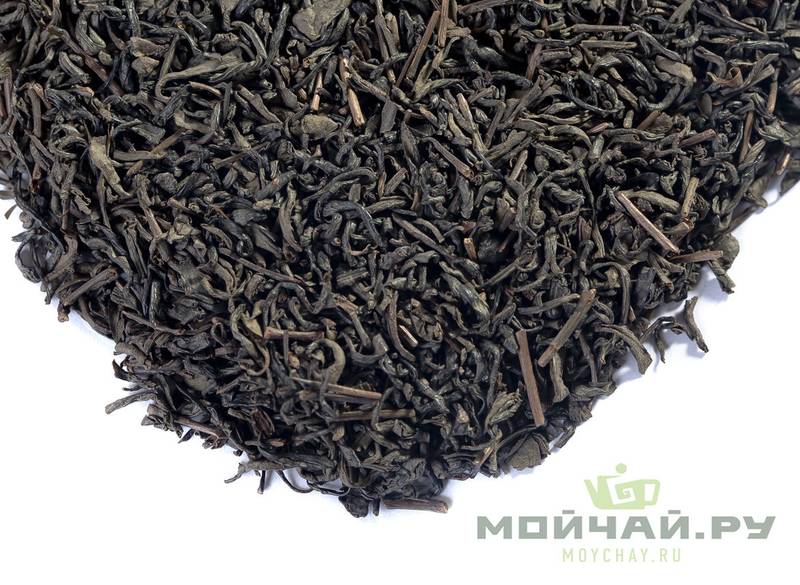 The tea was novel for being so unusual but it wouldn’t be for everyone, especially considering how far the character is from the generally smooth, soft, and floral more standard oolong range. Going lighter on the proportion would have probably improved results, even for essentially using flash steeps, bringing out more of the floral tone potential.

To some extent these two Guangdong oolong versions (this one and the Ban Xian Meizhou version) just seemed unfamiliar to me. This review doesn’t emphasize it as an interpretation but the novel flavor range discussed also related to a difference in feel. It’s hard to know if I would prefer them more after trying them a few times, due to acclimating to the character range. That’s how it can go trying unfamiliar tea types; sometimes it takes more exposure to really adjust to a different range, and sometimes it doesn’t transition to become a new scope of preference.