This is a unique product as tisanes go, a pressed mix of different fruits. The product description page

time of review. The label I have is in Russian but I didn’t take the next steps to get the ingredients

identified, even though the fruits looked interesting and unfamiliar. There is a story to be told about this

even if this specific fruit blend is never replaced as an option, since this dried fruit as a tisane range is

novel, and worked out to be very interesting in this version. 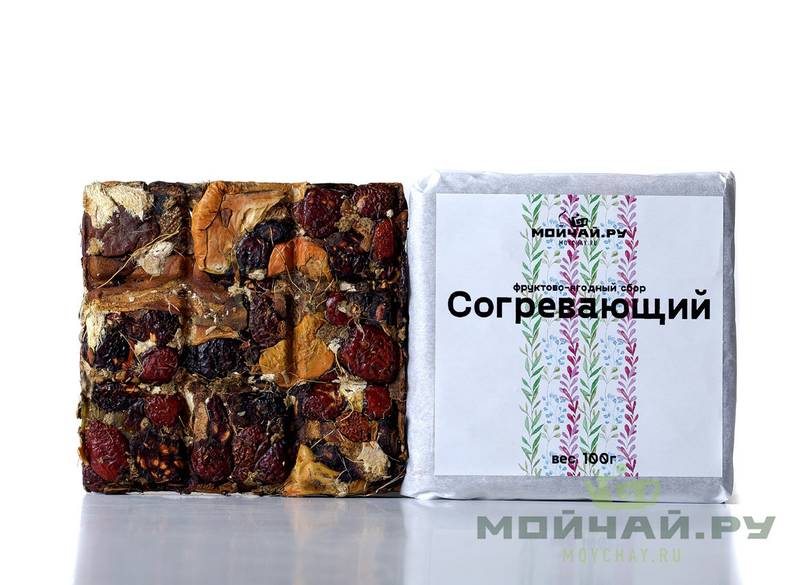 It would make sense to prepare this Western style (using a teaspoon to a cup approach, more or less. But

in this case a relatively opposite hybrid Gongfu / Western approach was used instead, in a large gaiwan,

attempting multiple infusions of timing set by how the infusion went the round before. The key to this

kind of tea, and to tisanes in general, or any infusions, is getting the timing right for that particular

material to infuse to a relatively optimum strength. For a dried fruit versus flower or dried leaf that

The first one-minute soak didn’t really get the fruit infusion initiated, with the liquid not soaking in and

extracting much flavor yet. The flavor that did emerge was interesting, warm and sweet, a mix of fruits,

not unlike a fruit cake. Somehow spice seemed to be included, evident even in a very light infusion,

towards cinnamon or nutmeg. I doubt this was a spiced fruit version though, since different dried fruits

can cover a broad range of natural flavors. The first infusion wasn’t as pleasant as it could be related to

being very thin but it was still interesting. 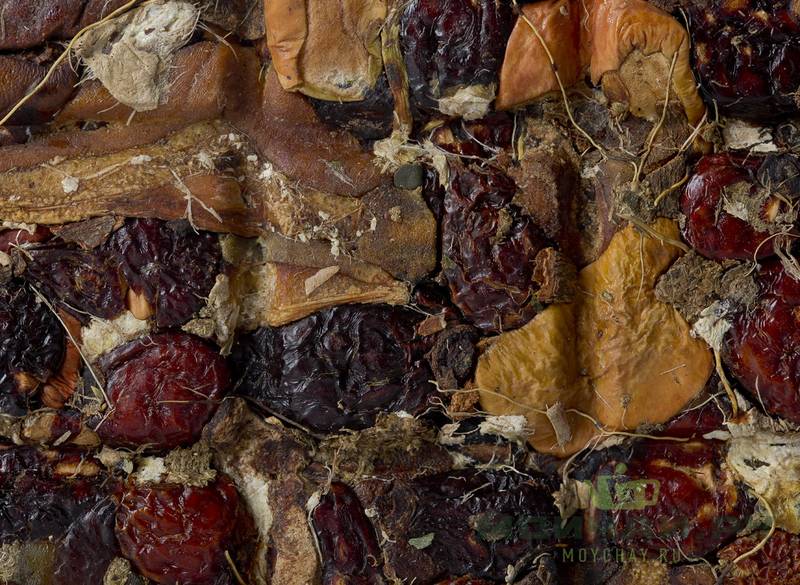 The second round infused for closer to two minutes, versus about minute for the first. Complexity and

intensity did bump up but it’s still not as intense as a standard tea infusion. Using over two minute

infusions is probably more ideal, but doubling the proportion would also work, adding two squares to a

endlessly, for 20 rounds if someone had the patience, probably requiring soaking until the water had

cooled after the first dozen or so to extract flavor. Simmering this on a stove in a sauce-pan would also

work, related to how masala chai is steeped, or how some people prepare some white teas. Or both;

after. It would work to adjust that infusion strength by adding hot water, if it was too strong after

simmering, since it would be easy to err on the side of overdoing it using such an approach.

It tastes citrusy, and fruity beyond that. A flavor list could be derived from the ingredient list; it would

taste exactly like whatever dried fruit or berry this is. Drying fruits changes their flavor profile a good bit

so the fresh versions of those might be more familiar. The tartness is nice, in a good balance for the

level of sweetness and other range. Flavor intensity is enough to start to experience what’s there but at

The next infusion was prepared using a very long infusion time to check on that, around four minutes.

That’s not necessarily so long for a whole-dried-fruit style tisane, but for a “real” tea (Camellia Sinensis

version) prepared Gongfu style it’s several infusions worth, even with this brewing at a low proportion

related to a more standard Gongfu approach. It is a lot closer to a hot fruit juice at this point; very

flavorful. “Hot fruit juice” isn’t the page that everyone is on, but this general range is similar to a mulled

but is well-received in some circles. Simmering cinnamon sticks in cider (a slightly fermented version of

apple juice) already works as a basic version, with plenty of options for variation from there. A bit of

clove would be nice, or some orange peel could add flavor complexity, with all of that moving the

mulled cider more towards how this tisane comes across. 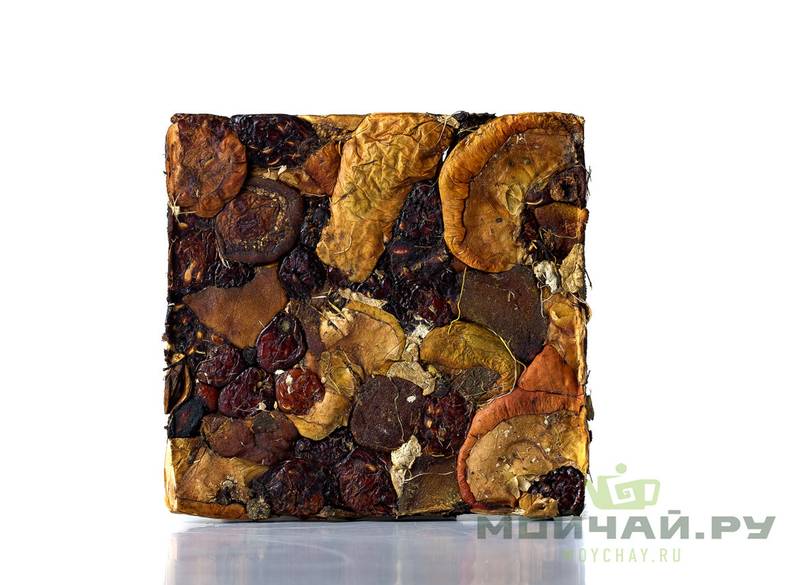 It still seems odd splitting the flavor down to elements, given those inputs are known (just not identified

prior to this tasting write-up). It seems along the line of dried cranberry (the tartness), apple and pear

(the depth, sweetness and warm richness), with a hint of citrus (a bit more complexity, and citrus). I’m

not sure how that hint of spice factors in; it still seems like a light version of nutmeg to me, or not far off

For someone expecting hot spiced cider this would still be way too light, not infused strong enough. For

someone somehow expecting it to taste like “real” tea (Camelia Sinensis) it just never would.

Another long infusion (around 4 minutes again, maybe 5 instead) turned out about the same. The

tartness balances better than it did in the early rounds; sweetness and other flavor complexity picked

up. Again a mix of dried fruit range is coupled with an apparent hint of spice, resulting in a flavor profile

there, or a jasmine black tea), but this would also work as a flavoring for other tea versions, to mix in

with one. It’s more of a stretch but it could also be used to flavor a masala chai, an Indian-themed

and clove, and possibly with black pepper and star anise, and all those flavors would match well with

this dried fruit, with a balance of them adjusted for personal preference. That type of spiced blended

tea is usually prepared with milk and sugar, and it can work without either added, but it’s a lot more 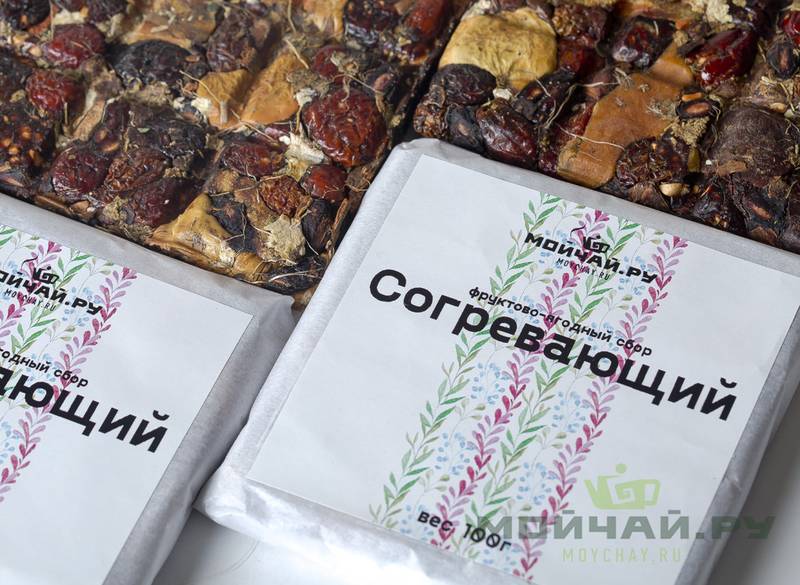 One nice aspect of drinking tisanes is that they can be enjoyed in the evening, even right before bed,

with no concern about caffeine disrupting sleep. This particular fruit version would brew any number of

rounds, so it would be possible just keep drinking it in the evening. It would work made closer to what

some call “grandpa style,” infused over a longer period of time, mixed with hot water and then

potentially even drank without removing the fruit. Since this would be fine at double or triple the

to get to it would work. It would just probably commit that thermos to retaining a trace of that flavor

range later on, so it wouldn’t be ideal for a thermos used for other teas that you didn’t want to mix with

It hasn’t transitioned on the next infusion; that’s to be expected. It’s still nice, reasonably balanced,

fruity (of course), only slightly tart, with good sweetness, and good complexity. The warm hint of spice

rounds out the rest nicely.

very nice. I liked it, and the different brewing options it opens up provides means to experience the