At time of review this product was sold out; the teas rotate year to year, so that new versions replace the earlier ones.  The connection between the two versions isn’t completely clear in the descriptions, and even the same producer might make slightly different teas year to year based on weather changes and other inputs. 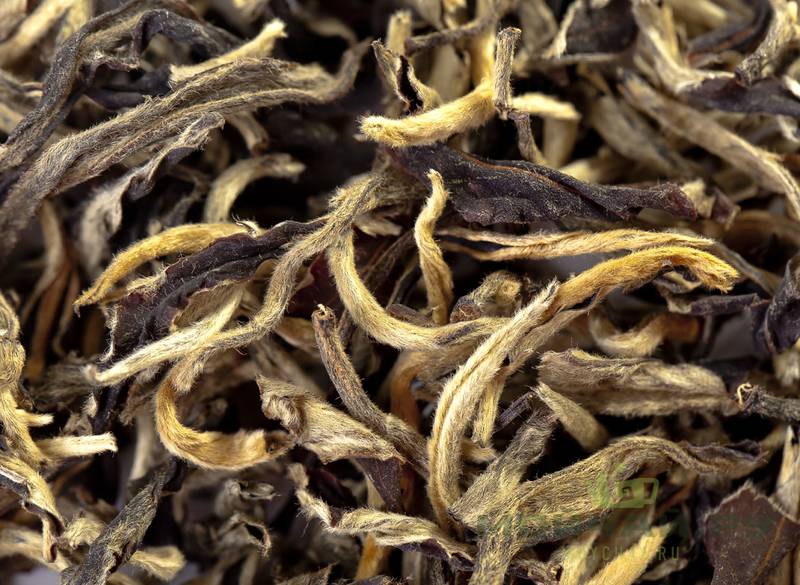 A reference to “moonlight” in the description probably indicates what this is, more conventionally called “moonlight white,” a type of white tea that comes from Yunnan.  It’s more oxidized than that general tea style is; judging from dry leaf color alone closer to a black tea.  This will return to an assessment about that after the review, which tea category or type it seems like most from tasting it.

Most white teas are made from Camellia Sinensis variety Sinensis plant types, the Chinese tea plants that are also used to make oolongs.  Almost all oolongs are, but nothing would stop someone from trying to make an oolong from a variety Assamica plant type, it just wouldn’t be a conventional style.  Variety Assamica teas are used to make pu’er, and Indian black teas (most of them; some Darjeelings are exceptions, made from variety Sinensis plant types instead, or potentially even plant hybrids).

Typical moonlight white versions are light and sweet, and not as subtle as silver needle / silver tips versions, more flavor-intensive.  Many include fruit flavor aspects.  As with essentially all white teas they include virtually no astringency as an aspect, which opens up brewing options to a broader range.  White teas in general work very well brewed at medium strength, similar to other tea types, or brewing them a lot stronger can increase the intensity to a more familiar level (familiar to some), or brewing them very light also works.

To me silver needle / silver tips style tea are often too subtle to work well brewed very lightly because not much comes across for aspects; a bit of thickness to the feel, some floral range, maybe dried hay or the like, but in general not much for flavor or significant feel when brewed lightly.  Moonlight white are often more intense in flavor so sweetness and fruit flavor can be stronger, even brewed lighter.  It works better for reviewing to brew teas lighter, in general, since although it’s a bit counter-intuitive that makes it easier to describe flavor and feel aspects.

On type background, and brewing approach

Moonlight white is most typically silver and dark, close to black, and this is more tan and dark.  It’s possible that means it was made with a different variety of Assamica plant type, versus only a change in processing steps causing that change, but it has to be a bit oxidized.  The translation of this tea name is a reference to that.  Moonlight white is most typically made with one strain of Assamica plant, per input from a tea maker friend in Laos, but per her take teas can still legitimately be called Moonlight White when made from others.

Sometimes variations in tea background (eg. using a different but similar plant type to make a standard version) make it hard to clearly identify a type, and a very high quality tea can fall in between clear categories.  It seems normal for tea drinkers to care about the experience more than definitions, set types, and naming conventions, but also normal for some others to take such things seriously, to only want to have conventional experiences, or at least to be in on as much background as possible.  That second approach certainly works better as a reference framework, but narrowing back exposure as  result gives up novelty of experience in the process.

As for brewing a standard Gongfu approach works; a typical proportion, relatively hot water (90 C or full boiling point, depending on preference), and short infusion times that relate to the proportion used, probably in the range of 10 to 15 seconds to get to a middle-ground but still moderate infusion strength.  The best way to evaluate results related to that is to try slight variations, since preference is a relevant factor.

It would be typical for a lot of people to rinse this tea, since many people rinse essentially every tea type, and most often pu’er if they only rinse some types.  Rinsing removes flavor from the most subtle types of tea, along with potentially rinsing off dust and other foreign material, and getting the tea leaves wet initially, so I don’t rinse white teas.  A flash rinse might be seen as a middle ground, but tasting that rinse liquid would probably confirm that a significant amount of positive flavor is removed from this tea type very quickly.

It’s not a conventional Moonlight White, based only on first impression, but it might be made in the same general style.  The flavor range is a bit warmer and deeper.  It’s still bright, clean, very sweet (typical of Moonlight Whites), so not very far off those in a limited sense, but it includes a bit more along the lines of freshly dried hay than typical versions do, and it seems to be a bit off the typical fruit range.  There’s definitely a fruit aspect to it though, maybe more along the line of dried apricot instead of a more conventional very light and sweet fruit (pear, or even towards a light berry).  The feel is soft and full.

It’s a very pleasant tea; it gives up nothing in overall effect for being novel in those ways.  Alternately that warmth and depth--just described as fresh but dried hay, not cured for a long time—could be seen as a warm version of floral range, towards chrysanthemum or chamomile.  The sweetness matches a rich, warm version of honey.

Fruit really picks up in the second round.  It’s still closest to dried apricot but it’s so complex that it doesn’t work to say it tastes like one thing; it covers a range.  That range integrates well with the honey sweetness.  The warmth I was interpreting as floral or dried hay is now closer to beeswax.  Only people who have smelled beeswax would have any idea what that refers to, how it’s different from honey, but for those who have the description couldn’t be any clearer or match better.  It’s a shame this tea version sold out.  If the next version--2018’s, pressed into a cake--is anything like this, and it probably is, this tea would really work for anyone who likes white tea and honey.  Or very mild Chinese black teas; this isn’t far from a range of those in character either.

The next infusion (third) doesn’t transition as much.  The intense fruit may be evening out a bit, leveling off with more mild earthiness coming out, back to more dried hay range.  It still does taste like apricot, honey, and beeswax, the balance just shifted, and touch of wood joined in with the hay (cured hardwood, if one must go there, to specifics).  Teas of this type (in this general aspect range) tend to not change across infusions as much as some oolongs and sheng pu’er do; black teas and shu pu’er also tend not to.  Some versions within those broad categories transition, for sure, but beyond being less likely to the range tends to be a little narrower.

More of the same transition on the next round (fourth); wood-tone has drawn even with the rest of the fruit and honey sweetness for level of input of that aspect.  The tea is still pleasant and positive but it’s not quite as nice.  The beeswax component still makes this a uniquely positive tea experience, even within this aspect set.  It has decent fullness of feel and aftertaste effect as white teas or very mild black teas go (or as any style goes, just falling short of above average sheng pu’er for both, since those tend to be very structured in feel with an extended aftertaste effect).  I don’t appreciate those aspects as main factors in liking a tea, myself, but one of them not contributing to overall effect in a normal way (for above average quality tea) can make a tea experience seem thinner, more limited.

This infusion (the fifth) extended for up towards 20 seconds time to draw out more infusion strength, to see how that changes the effect.  Feel should pick up and underlying earthy range should increase, but experimenting is about seeing what will actually change.  The beeswax range seems to increase more than the wood-tone; I wouldn’t have expected that.

Messing around with using water at 90 C versus full boiling (and flash infusions) would also be another way to shift aspects a little.  The one boiling-point-only school of thought in Gong Fu brewing claims that the only reason to ever use water below full boiling point temperature for most types is to adjust for flaws in teas (unless drinking a green tea, which some people would see as a flaw in a tea too, being that tea type).  The feel and flavors just change a little brewing teas at slightly different temperatures; to me it seems a matter of preference, which potentially could vary by tea type and version.

The next round (sixth) is a natural place to leave off taking notes, even though extending brewing times a little would allow the tea to keep going for awhile, maybe another six rounds.  Earthiness might’ve picked up a little; the wood-tone has moved from cured hardwood to a more well-aged version, towards what people sometimes call forest floor, maybe a late autumn version of that.  I wouldn’t interpret that as negative character range, and no negative aspects have emerged over any of the infusions, a good sign for overall tea quality.  The tea did brew a large number of infusions beyond that, probably another six, but I didn’t take notes on those later transitions.

It’s hard to judge if this tea is really closest to Moonlight White or to a mild form of black tea.  Being this oxidized it might make sense to go ahead and call it black tea, but processing steps being closer to normal for Moonlight White would account for this character type, even with the differences.

As for setting up expectations given the character is that far off a Moonlight White (richer in tone, mostly; it is as sweet, mild, and fruity as those tend to be) it might work better for some tea drinkers to expect a mild, sweet, and soft black tea instead.  Then again less-fermented black teas are also unconventional, even though that does come up.  Either way it’s a really pleasant and unique tea. 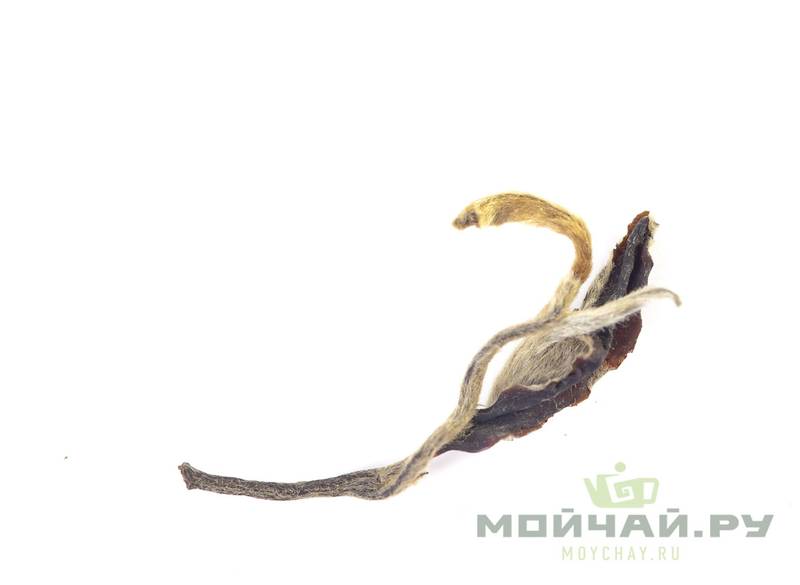