Three year old Burma (Myanmar) origin shu sounds perfect, based on what I’ve tried of such teas.  The sheng that I’ve tried from there tends to be on the bitter side, great for someone who loves intense bitterness in sheng or probably more conventionally including potential for long term aging.  That should also transition to intense, flavorful, but still pleasant aspect range shu, since bitterness as an experienced aspect doesn’t make it through the pre-fermentation / wet piling processing; the related compounds transition.  The shu that I’ve had from Myanmar has been excellent, as I expect this one to be.  This tea is sold out per the related listing, a recurring theme for tea samples I’ve been trying lately; apparently versions transition.

The dry tea look is unusual, a bit lighter in color than shu often is.  At a guess that means this tea was pre-fermented less completely than some versions are, which would pull the character back from the earthiest range of flavors (the peat, tar, and slate range that can come up), maybe even reserving potential for some limited degree of aging transition.  A vendor recently expressed that less fermented shu really do have the potential to transition more over time but I don’t have a clear feel for that myself. 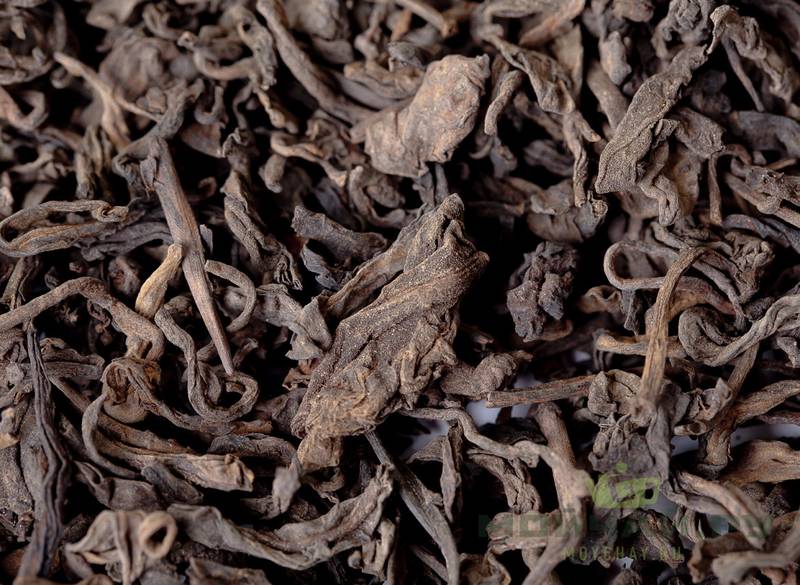 After a short rinse the first infusion brewed for around 15 seconds, long enough to make a good start on wetting leaves and initial infusion.  Shu is novel for being pleasant when brewed at a broad range of infusion strengths, not the only tea like that, since shou mei, other white teas, and very mild black teas work out similarly.  I wouldn’t drink a really nice shu thick enough to really ramp up the intensity and feel towards the levels experienced in mild versions of coffee, even if I do also like the tea prepared like that.

Shu also works well brewed very lightly, since plenty of flavor still comes across, but to me a more medium infusion strength would be optimum.  That would still be light by Western brewing standards but not closer to flash-brewed, as works better for sheng (young or aged sheng; most examples include so much intensity and complexity that brewing them at any strength beyond on the lighter side doesn’t do them justice).  That applies both to young or old sheng (newer or aged), for two different reasons:  to moderate astringency or bitterness for young versions, or just because lighter brewing allows you to pick up finer aspects better for the older teas.

This tea is fantastic.  A warm earthiness and sweet, spicy berry-like range stands out right away.  The complexity is great, and the balance it strikes, even evident as a first impression.  The earthiness is more like cocoa than slate mineral, although of course there is some mild, warm mineral range underlying the rest.  The fruit aspect is close enough to dried strawberry, it seems to me, just missing some of the tartness that goes along with the warm, rich tones of even the dried version of that fruit.  Spice range is a bit non-distinct, but the cocoa trails into more complexity that comes across as spice to me.  That general range ties to a jujube candy sort of catchy, sweet earthiness, not so far from root spice range.  All that is from the first few sips; this tea will probably strengthen, clean up, and transition a bit over the next two or so, then level off.  It’s not musty or off of being “clean” in effect in the first infusion but a soft, light dryness will probably shift to a clearer, more structured, but still mild form of mouth-feel. 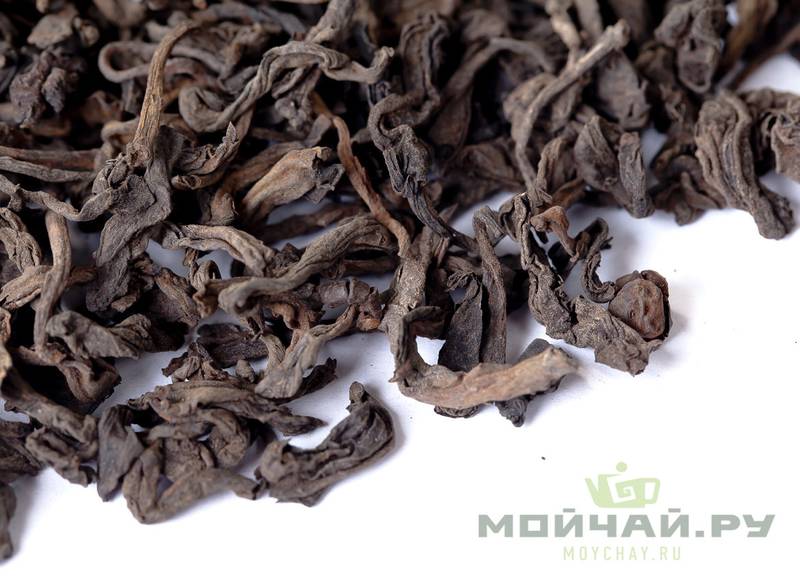 I let the second infusion go more than 10 seconds, and it would be possible to back that off to just under 10 for as fast and as intense as this seems to be brewing.  I didn’t go with a “packed gaiwan” level of proportion, probably closer to 5 grams than 10 for a 100 ml gaiwan, which is probably a good level for this tea.  It’s more flexible than other types though; it would work well across a broader range of parameters, and dialing in some sort of optimum is a lot less critical.

The feel and flavors did change as expected.  This is a bit cleaner (not that it was musty—it wasn’t), still quite intense, even better really.  There was absolutely no fermentation after-effect to continue to clear through aging (“wu doi”), and I’m not sure how much more this tea would transition over any number of years.  The way those flavors and aspects balance is nice.  The mineral layer is mild and integrated; fruit and spice stand out along with a warm, earthy cocoa range.  It’s a straightforward, approachable, easy to drink tea but it’s not one-dimensional, on the complex side instead.  Of course people who don’t like shu might not relate to it as well, but some people who think they don’t like the general type might find out that they do in trying a version like this.  It’s pretty far off a shu that’s less approachable related to including edgy or challenging earthy aspects.  Then again I don’t mind a little tar or petroleum in shu, or even a touch of char; I’m fine up until fishiness kicks in.

In terms of transition the fruitiness might have given way a little to the jujube sort of candy (related to black licorice) or spice range.  Otherwise it’s not so different.  Related to process and general character, with this tea including no challenging aspects brewing it using full boiling point water would make sense, extracting all the flavor possible.  It would even work to brew it for longer infusion times, for 20 to 30 seconds, and drink a very different version of it inky black.  To me that wouldn’t be optimum though; it would mask how pleasant and complex the aspect range really is.

On the next infusion complexity ramped up even more.  The dried fruit has settled into a supporting context layer, not as noticeable.  Jujube or black licorice is still present but an aromatic version of dark tropical hardwood has joined that.  It’s a bit towards aromatic range in incense, frankincense or myrrh, but really it lands closer to the more ordinary tropical hardwood smells like (a little like my “wardrobe,” a cabinet based version of a closet).

The cleanness and sweetness makes it all work well.  There is nothing challenging about this tea, but it still has a sophisticated and complex overall character, as shu goes.  Shu only gets so interesting or so good and this is about it.  It can be a little more intense; it’s my impression that letting the fermentation process run longer can bring out edgier earthy complexity and intensity.  But this balance is right; it stops where very positive aspect range seems more or less optimum.  A more mild form of tea plant (initial tea leaf compound composition) probably couldn’t produce even this degree of complexity and intensity.

I lost track of brewing a round and let it go for about a minute, which works to check on how that changes things.  The character doesn’t seem to be changing, just the intensity is different related to that input.  It’s as strong as coffee, just a lot more drinkable than black coffee.  The flavor may have pulled a little towards a light roast coffee too.  There’s still some mild spice range in the background, and hint of some sort of berry or other fruit, but an earthiness stands out, a very clean, spice-oriented version of it.

From here the tea will keep going, and aspects will shift a little in later transitions, but this kind of tea isn’t mostly about that.  The character is simple related to feel structure being full in feel, with moderate aftertaste, and an approachable flavor range that transitions but not as much as some other types.  I get it why people end up wanting to trade out that approachable, pleasant nature for the additional complexity of aged sheng.  Of course that does involve dealing with the uncertainty of aging teas, encountering additional expense, brewing tea more precisely to optimize it, versus brewing working out across a broad range of approaches.  This is still a nice tea experience though, and to some extent the two types are just different; it’s not as if shu serves as a direct equivalent for aged sheng.

On the next infusion the character stays the same, maybe with intensity leveling off just a little, probably not helped by brewing three lighter rounds worth of flavor and other compounds out in one infusion.  This tea still has a ways to go, producing good strength and complexity across a good range in around a 20 second infusion time now.  The fruit aspect seems to have changed a little, maybe on towards a dried dark cherry; odd given that earthier, dark-wood range had picked up more in the middle rounds.  That dark wood range might be a little more aromatic, although it had been a little like that all along, towards an incense spice, or maybe a little towards pipe tobacco, depending on interpretation.

All in all it makes for a nice tea experience, relatively complex and quite pleasant. 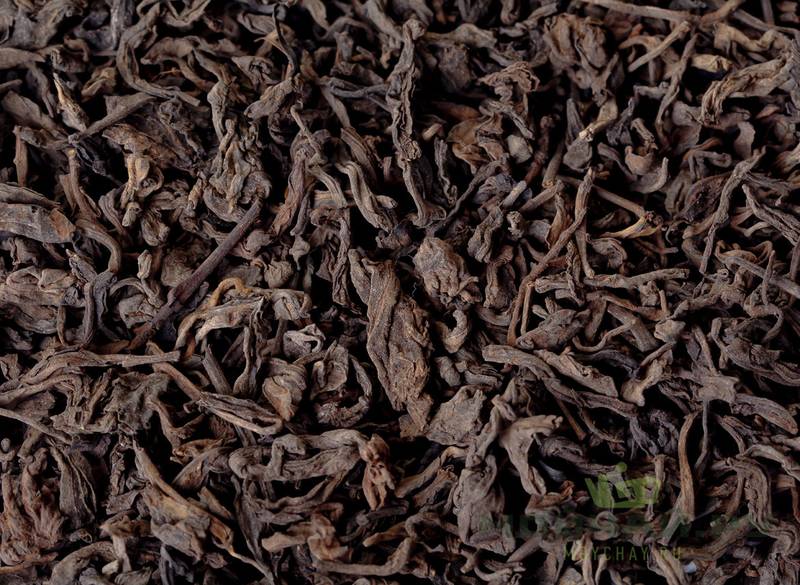